Dylan & Ava playing with trains on the light rail train. We had a lovely outing on a cool but sunny day. 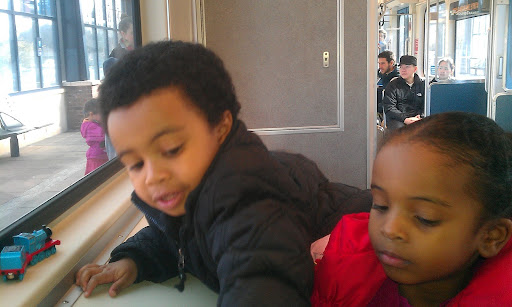 We window shopped, people-watched, and I tried to keep a close eye on Dylan, who is so low to the ground and fast, that he can disappear among clothes racks the moment you turn your attention to something else. But I brought some of his little pocket-sized Thomas trains, so those kept him semi-occupied as I tried to speed-peruse the racks. Later, we sat in the sun outside Starbucks at 4th & Pine, people watched in Westlake Park, and ate snacks we'd packed.

As we headed back to the light rail station in the tunnel, the afternoon was marred by discovering we'd been spit on, apparently from an overhead walkway at Westlake station downtown.

Didn't see or feel it, only noticed the goo on me and Dylan as we walked along the platform. Who the
eff spits down into a crowd of people?! "Dirtbags," said a friend on Facebook. True dat.


I was disgusted having to clean it up as best I could with pocket tissues and sanitizer (traveling with kids means being prepared) and rode home seething, knowing I'd have to wash our coats once we arrived.

But I didn't want the kids' day spoiled, so I put on a happy face, which lasted until we arrived back at our car and I went to gas up and discovered gas is now $4.19/gal. At that price, light rail may become more a part of our weekend outings.

Despite all that, it was a lovely day. Dylan conked out a few minutes before we arrived home and I put him in bed to finish his nap and started dinner. Ava buzzed around me as I grated squash and zucchini for turkey meatballs.

"What was your favorite part of today?" I asked.
"This right now," she responded, hugging my leg and stretching up to kiss me. "Just being with you."
Posted by NatashaJ