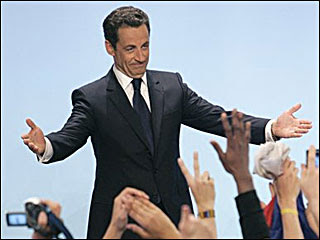 Ultra-conservative Nicolas Sarkozy has won the presidency in France and I must say that I'm worried. The BBC in this article summed up the mood in Paris this way: "There is a feeling in Paris tonight that France, as Mr Sarkozy said in his victory speech, has turned "a new page of our history." Unfortunately, I fear that the page came out a dog-earred playbook used by American neo-conservatives to set us on our current, acrimonious approach to world policy. Many of the people I met recently in Europe pointed to this policy as a prime example of why Americans have lost so much support in the world community.

Even American wire services are describing Sarkozy as "a blunt and uncompromising pro-American conservative" without giving a more nuanced explanation of his views and plans. It's as if the fact that he's pro-American is good, period. They don't explain that he is pro-neo-conservative America. (Shudder)

Which is also why the French presidential election outcome is so perplexing. There are already many pundits weighing in on why Sarkozy won, what parts of his platform resonated the most with voters and whether people truly support his plan for France or simply didn't find enough of a plan expressed by opponent Segolene Royal. Heavy sigh.

The only thing more distressing than the election outcome is that I had to turn to CBC news out of Canada at the far end of the cable dial to find any news about the election late tonight. Mon dieu: must we always be so inwardly focused? In honor of the general level of U.S. interest in world affairs, I'm off to to navel gaze before turning in - a feat that is becoming increasingly difficult as my girth grows. Five months down, four to go. Good night.
Posted by NatashaJ No comments: Links to this post