Tearful landing at Museum of Flight

J. scored a nice used two-seat stroller for the kiddos at a local consignment store and it's made us eager to hit the road for outings without worrying about how far the kids will have to walk, and who might be ready to nap when we get there and thus need to be carried.
Plus, although I love carrying either of the kids in my Ergo, they're both right around 25-27 pounds, which gets tiring over long distances. So the gigantic, kid-friendly Museum of Flight in Seattle was perfect for giving the stroller its first workout. 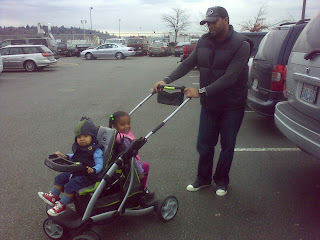 It's a great place for kids, although ours were probably a little young to really enjoy it. Dylan in particular is still really just in the drooling, teething, observational stage. Ava was able to try out some of the kid zone toys, like this kid-sized copter. 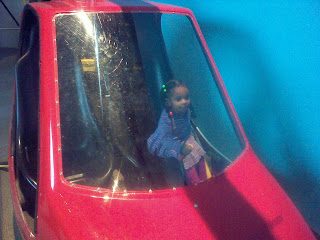 There were very cool displays on women and African Americans in aviation history in particular that were educational and inspriring. But the place is very big, as is necessary for a structure housing full size jets and other airplanes on display. Even with a stroller, after a couple hours, the giant planes hanging from the ceiling and the faux air traffic control tower lost their allure and we hit the witching hour.

Ava lost her chicken when we told her something horribly unreasonable, like she couldn't keep hopping on and off the stroller while we maneuvered through the displays and had to sit down. 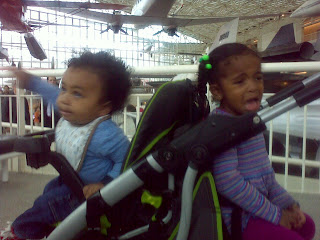 Judging by her face and the piercing wails that were disorienting bats in nearby caves, you'd think we told her we were selling her into an arranged marriage to a middle-aged desert prince. And at that point in the outing, that didn't seem like such a bad idea. Note the expression on Dylan, the tempermental teflon Don: his usual picture of calm. Together, they are the perfect balance.

But next time, we're taking snacks and water bottles for everyone, which was a last minute oversight. I usually take snacks everywhere. By the time we left, I felt like we'd walked the length of Boeing Air Field, which sits just outside the museum. Treats might have forestalled the meltdown at least until we got back to the car, where they both promptly fell asleep before we'd even left the parking lot.
Posted by NatashaJ No comments: Links to this post