8 months and on the move

Has anyone ever played the prank of moving something or several things in your life from their usual spot to places they're not supposed to be or where you'd never expect to find them? Like: "Guess I'll get something to drink from the fridge... What the?! What is my remote doing in there?"

That's how it feels everyday at our house now that the large but helpless infant we brought home eight months ago is developing into a busy, mobile boy. The only difference from the prank version is that there's usually a trail of drool to follow to his destination. It's like a giant slug moved in.
Before, we could set him down and he'd roll over and appear to practice the downward facing dog yoga pose for several futile minutes in an effort to figure out crawling. Now, that he's figured it out, one moment he's cruising the furniture, the next he's 7 to 10 feet away with some sharp object he's procured enroute.

"Is he crawling?" people ask expectantly. "Towards every available danger," I reply. And now that he's moving and can acquire Ava's toys if he wants, she's become more possessive of everything, rushing to try to play with anything he has. She is still very helpful and sweet to him most of the time, but she has her moments of "Wait, you're cute and all but who okayed you touching my stuff?" 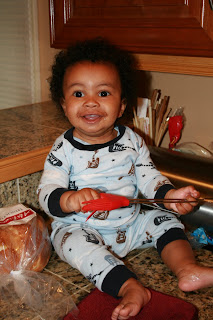 That said, they're getting along great otherwise and Ava is taking the role of big sister very seriously, not only alerting us when he's going somewhere he shouldn't, but also trying to feed and dress him when the opportunities arise. 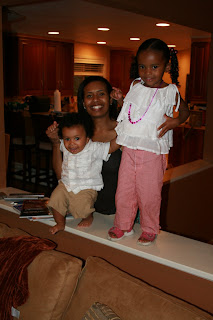 But her days of dominance may be short lived: she turns three next month and weighs 27 lbs. He's 8 1/2 months and weighs 22 lbs. At least if she needs a body guard she won't have to look hard or far: just follow the drool.

Sent from my Nokia phone
Posted by NatashaJ No comments: Links to this post