At long last, Ava's passport came a couple weeks ago and it's super cool. It's the new, fancy one with the electronic (don't call it Big Brother) stripe in it. So it seemed fitting that on the weekend before the Marting Luther King Jr. holiday, we hit the road for Canada, thus celebrating a freedom of movement and travel that was unprecedented for African Americans in King's lifetime.

I sometimes wonder how Ava's generation will view issues of race and the convoluted history of people of color in the U.S. Will it be irrelevant and her interest level much like mine in paleolithic era civilizations? Which is to say, cursory at best? Let's hope she's all, "Racism? Oh yeah, I read about that in History class. Hard to believe how backward people used to be. That's so 20 years ago."

Sidebar: what's an Emelkay Holiday and why is it worthy of shrill commercials advertising "some of the best prices of the year?" That's what one local commercial sounded like: "COME ON DOWN TO MATTRESS TOWN!!!!* THIS EMELKAY WEEKEND WE HAVE HUGE SAVINGS STOREWIDE!!! DEEP, DEEP DISCOUNTS ON THE MOST POPULAR BRANDS!!!

*not an actual store. I just made that up for effect. But there was a real store with a similarly ridiculous commercial for the Martin Luther King Jr. holiday. And they were VERY insistent, hence the caps.

Yeah, co-opting a national holiday celebrating the accomplishments of a noted civil and human rights pioneer who was assassinated for his beliefs is an appropriate way to get your January sales numbers up. What's next? The Benazir Bhutto half-yearly sale? Some retailers have no shame.

Anywho, we got a late start but wanted to have dinner at our favorite place up there, Gotham Restaurant. So I Googled it on my phone to get a phone number (forgetting that it's already in my address book. Duh.) and up pops this page alleging that "Two bodies lie dead" in front of Gotham less 17 hours earlier!! WTH?!

Since I was unfamiliar with the site, I called the restaurant to verify and get a reservation. I halfway expected to hear a recording or maybe even a somber voice, cracking with emotion on the other end of the line. Instead, a perky Canadian took my reservation for dinner and when I asked about the shooting, she said curtly, "Yes, we had a police action last evening. Will you be needing anything else? I have guests here waiting." Uh, no. Perhaps it was just an arrest of some sort that happened to go down in front of the restaurant, I thought.

We arrived around 9 p.m. and had a lovely dinner in a plush booth with Ava, who was in a fine mood, despite the late hour. We checked in to a hotel that was chintzier than it looked online, so we checked out and found another. By this point, with the clock striking 11pm, Ava's (understandable) meltdown ensued. But we soon settled in for her first hotel stay ever and some much needed rest.

The next day, we got to see the awesome view from our 14th floor room... 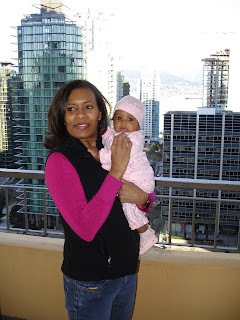 Me and Ava, a vision in pink.
We're looking hard for clothes in other colors as she outgrows the ones she has.
and we bundled up against the sunny but 28 degree temperatures to head to a nearby restaurant for brunch and people watching. 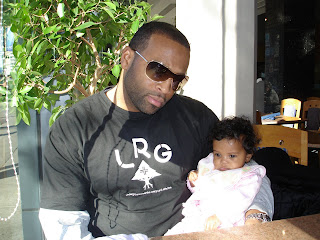 J. and a pensive looking Ava in the sun. She needs baby sunglasses as cool as her dad's

Later, as we pushed a stroller down Robson, we realized that all the newspaper boxes were filled with banner headlines that read: "Two Shot and Killed Outside Gotham" and "Shooting outside steak house kills 2." The shooting literally happened right where we pulled up for the valet! Some local crime figure was shot to death by hitmen as he exited his car to go into the restaurant for an engagement dinner "as his horrified fiance looked on" said one paper.

Criminy! What kind of childhood memories are we creating? Ava in 2017: "Remember that time you took me to that restaurant where they'd had a gang hit like hours earlier? Good times. Good times."
Posted by NatashaJ 1 comment: Links to this post