Every day in Copenhagen was chock-full of meetings and interactions with interesting and influential Danish leaders. First up: a meetng at the Ministry of Environment with Thomas Becker, Denmark's lead negotiator in climate change of the Subsidiary Body of Implementation under the UN Climate Change Convention.

Mr. Becker provided a great overview of Denmark's efforts to reduce global warming by changing personal habits and industrial energy use, in addition to increasing the country's output of green energy, like wind power. In fact, one of the global leaders in the field is a Danish wind turbine company called Vestas Wind Systems. This article talks about Denmark's plans forn using offshore windpower to reduce global warming and reduce the country's dependence on coal, oil and gas.

Next up was a visit with Michael Ulveman, also a German Marshall Fellow, and the Spokesperson for the Danish Prime Minister, which was a real treat for me since we do similar jobs and both have a background as a reporter. He gave us a great overview of the Danish political system, the challenges their country is facing with immigration and the burden on citizens for supporting their very generous benefit system. He outlined options the administration is evaluating and talked about Denmark's role in the EU and on the world stage.


A theme we would here many times is that "(insert country here) is so small compared to the U.S. but we are taking action to deal with (insert regional or global issue) so that we can create a better future for our country and for the world." I felt bad sometimes because it was so clear that the U.S., in contrast, was not being as proactive, despite its astronomically greater size and political power.

It was stated implicitly in some cases, explicitly in others, that part of the reason there is such animosity towards the current U.S. administration from many Europeans, is that we have all this power and influence but we squander it and don't use it positively or productively to compel others to do what's best for the global community. Instead, we sit navel-gazing and getting worked up about purely selfish interests and ostracize other countries, instead of building coalitions to affect greater change and more positive outcomes for people and countries around the globe. Now back to our regularly scheduled blogging.

Afterwards we toured the Prime Minister's offices, including coercing Chad and Michael to sneak a seat at the PM's desk. 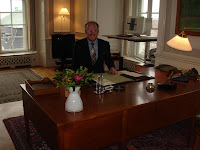 That's our group below in the Prime Minister's very cool media briefing room. 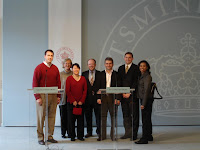 And we saw just h0w committed the Danes are to reducing greenhouse gases and dependence on foreign oil. Men and women (often with kids in tow) bike all over the place, rain or shine or snow in Copenhagen. Bikes littered the sidewalks in many parts of the city and there are bike lanes all over. Granted, Copenhagen is almost completely flat, which makes this much more feasible than in say... Seattle. 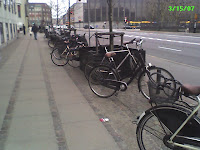 Still, even their leaders are in on the action. Down below is a shot of the Prime Minister's car. Notice the bike on back. He apparently is driven to meetings that are far away, but sometimes bikes to them and back, or gets a ride home. How cool is that? 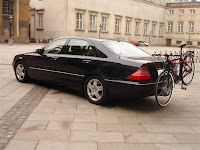 That afternoon, we talked Danish Integration with a professor and another GMF fellow who is the advisor to the Minister for Social Affairs and the Minister for Gender Equality. That one was chock full of info too. But that's later. You can see why we are beat by the end of each day: it's a lot of back-to-back meetings on very thought-provoking topics, followed by discussions of the same over dinner. It's a real treat though to spend all day on such interesting issues. More later!
Posted by NatashaJ No comments: Links to this post