By the grace of God, I am closing in on 40 years old next month. Most days, I feel about 28, except when I'm around actual 28 year olds, who I now realize are genrerally much perkier and prone to/able do things like go out to concerts that last until 2 or 3am during the work week. They can then show up for work and say things like, "I'm dragging a little. I need another cup of coffee to get me through the morning."

Conversely, if I attempted the same thing, A) I wouldn't enjoy the show because I'd be thinking about how wrecked I'd feel the next day when the kids come bounding in to wake me up in the wee hours B) I don't drink coffee, so I'd be trying to kick start my day with my standard hot chocolate, which unfortunately, is just soothing, chocolate goodness that makes me want to curl up in a blanket and read something, so I'd be fighting fatigue even more and likely wind up heading to the 'wellness/nursing' room at lunch to take a quick nap instead of eating.

Given a family history of a grandmother who lived until a lucid 100 years, and all her sisters who lived healthily into their 90s, not to mention several aunts and uncles also active into their 60s and 70s at this point (one of my uncles runs 3 miles most days. He's nearly 70!), I probably have a good chance of ekeing out at least another 40 to 50 years, barring any major mishaps.

So I'm planning a 40 day countdown to the big day, during which I do some things to prepare me for the next phase of my life. After all, we spend the first 20 years or so of life being prepared for and preparing ourselves for the next chapter of life or "adulthood," right? So I think it makes sense to take stock of where I am now and start laying the groundwork for what I want the next few decades to look like.

I started by taking stock of the things I've always wanted to try, do, or attempt, but haven't gotten around to yet. Not exacty a bucket list. Maybe more of a "before it's too late to try" and "while I still have the interest and inclination" and "wouldn't it be cool to..." list.

I considered adding "play pool with Dwayne "The Rock" Johnson or Hugh Jackman (no, that's not a euphemism and hey, don't judge!), but it didn't fit my criteria of being attainable in the next 40 days and some sort of skill or experiential improvement that would better prepare me for later life. Although an argument COULD BE MADE, believe me.

Some fathers and sons fish, some hunt, some do tandem technology. 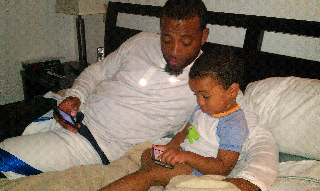