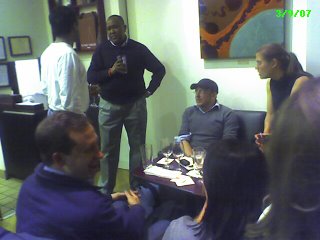 You know how they have these terrorist watch lists for people with suspicious surnames...like Bin Laden, Ahmadinejad, Smith, or Jones? Yeah, surprise to me too. The frisk at security when I left Sea-Tac should have been a clue. It was my first ever. I'm talking full on, front and back, can you at least kiss me first pat down. It wasn't a complete waste: I now know for sure that my Mary Kay Sun Essentials Lip protector is okay for in-flight transport and poses no threat to homeland security. And I think we'll all sleep safer tonight knowing that.

So we headed to Dulles Friday afternoon for the flight to Brussels. It was wall-to-wall people and the counter staff were being less than helpful. I know: shocking. But our group had pre-paid e-tickets, so we anticipated a speedy check-in. Of course, anticipating and receiving, while both verbs with a bunch of vowels, have little else in common.

When I reached the counter, I was informed that since my ticket said Natasha Jones, and my passport still had my maiden name of Smith, I couldn't check in. Post-9/11 security and all. And they wouldn't accept a copy of my marriage license, which had been sufficient when we flew to Paris two years ago. It needed to be notarized. Never mind that my driver's license and every other card in my wallet has my married name.

"No I CANNOT use your driver's license as proof or change the name," the gate agent said in this offended tone, as if I'd asked her to smuggle me through security in a large rollaboard. "I can be fined $25,000 because of Homeland Security rules, blah, blah, blah." So after 15 minutes in that line, I needed to go to another line on the opposite side of the ticket counters to get this all straightened out. Aaaargh.

I arrived to find several people ahead of me, already in varying stages of distress and exasperation over the wait and the counter staff. This included the first of two woman I would soon see at the counter in tears after dealing with one particular ticket agent, who apparently gave up a lucrative and rewarding career at the DMV so she could "shine" in a whole new milieu.

15 minutes later, I made it to the counter and explained my dilemma. To which she replied with a heavy sigh, "I guess I'll have to learn how to do this today too." Are you kidding me?! There are enough people in line to create marching band formations worthy of the Rose Bowl halftime show and there's someone TRAINING on the front counter?! Aaargh. Let me just save you the 30 minutes out of my life that I'll never get back with this synopsis of what transpired next.

More similarly useless suggestions ensue until the gate agent literally standing at Useless Ticket Agent's elbow overhears Act 2, Scene 2 of the three act play Airport Absurdity and says, "I can notarize things. So can she," indicating another agent at her other elbow, both within arms reach of Useless Ticket Agent.

So one of them notarizes the marriage license and uses that to check me in, a process that takes all of six minutes. Not including the preceding HOUR it took to get to that point. After that, I sailed through security and rejoined my group, which had convened in a wine bar to wait for boarding. That's some of them in the picture above.

After episodes like this, I usually say, "I don't drink, but I may take it up today." :-) Hope your day is a lot less eventful.