My baby is three!

We spent the last couple days celebrating Dylan's 3rd Birthday: treats at school, dinner with both sets of grandparents and several new Thomas the Train-related gifts that now accompany him to bed.

Hard to believe he's grown from a little month-old butterball in my arms 3 years ago to that smiling kid next to Jason who knows every train in the Thomas and Friends world and who comes home every night and heads straight to his room to craft a new masterpiece before running to us to declare: "I built you a beautiful train track! Come see!" while dragging us by the hand to see for ourselves. 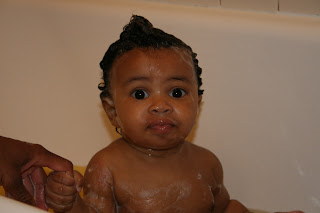 He loves climbing and jumping off of any stationary object and is impulsive and physical in ways that still surprise us, mainly because he's so different from his older sister. With her, we didn't child-proof anything, simply telling her: "Don't touch that." She'd nod solemnly and do so.

This guy? Left to his own devices, he'd touch, bang, throw and drop anything not nailed down, as if to say, "This? Don't touch this? Right here? Don't push it off the table like this?"
Last week, while he stood on the bathroom counter waiting to get his teeth brushed, I turned away from him and bent over to help his sister with her shirt. A moment later I was nearly knocked over as he launched his nearly 40 pounds through the air and landed on my back with no warning. What the?! Who does that?! Apparently him. After a stern warning to never do that again if I wasn't facing him, he gave me a huge hug, kissed me and said, "I love you Mom."

I love you too, you little character! Happy birthday.
Posted by NatashaJ No comments: Links to this post