Fellowship continued: Portugal's high art and lower classes, all in one day

So I've decided the toothpaste is out of the tube and all I can do continue to post periodic highlights of the tail end of my fellowship trip before the warm glow and memories fade. There's no way to fully capture the wealth of experiences, connections, laughs, surprises, frustrations, and insights I gained during the three weeks, so I'll just touch on the big stuff, to use a technical term.

So after leaving the awesome Gulbenkian museum, we headed to the suburbs of Lisbon to meet with some of the city's immigrant residents and several community activists working with them to provide services to youth. This was a major highlight of the trip because we actually had a chance to talk with immigrants to the area, instead of just talking about them, which is how a lot of bad public policy happens.

Over the course of 2-3 hours, we visited a class for children at risk of dropping out. It reminded me the Boys and Girls Clubs in the states because the program serves a dual purpose of providing a safe, welcoming place for kids to engage in constructive activities, have fun, and be with caring adults. In addition, this program worked specifically with children of immigrants who are struggling to learn Portugese, have sometimes-difficult family lives, and are either out of school for disciplinary reasons or at risk of dropping out. 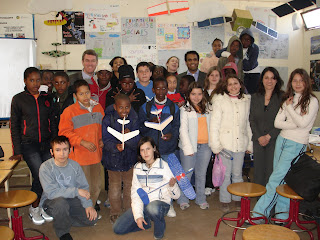 The kids above were doing a project that uses construction of model airplanes to learn about math and technology. They were like most 8-14 year olds: energetic, some shy, some self-assured, and all eager to connect with us. They practiced their English, asked us about the U.S. and where we were from, and a couple kids showed off their dancing skills demonstrating traditional African dances that they have melded with hip-hop-inspired music. Despite the challenges the kids face, they clearly felt at home in the program classroom and the room was just filled with typical youthful exuberance. The kind that lead adults in the program to quietly pull one or two rambunctious kids aside and firmly suggest that they cool it.
From there it was over to a settlement where we were instructed to leave our valuables in the van with our driver because it was going to be a lot rougher neighborhood. Once we arrived, we met a resident activist (third from right below) who moved to Portugal himself 17 years ago from one its former colonies in Africa (Cape Verde I think) and now helps more recent transplants navigate the system to get documents, work and other resources. 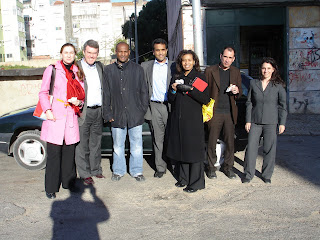 He showed us around the settlement, set into the hills outside Lisbon. It's basically a shanty town that is allowed to exist sort of outside the law. Every few months, the authorities come and bulldoze a few homes, and residents simply cobble them back together from scavenged cinderblocks, tin for the roofs, and other materials. I snuck the picture below as we crossed a roof in one of the areas. You can see how they've managed to cobble together a community. 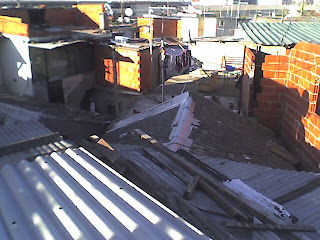 As illegal immigrants in many cases, they exist on the outskirts of the city and of the law, so when the bulldozers come, they leave, and return when it's safe to rebuild and begin anew. Talk about resiliancy.
Despite these challenges, activists like our host are trying to make life better for the younger generations who have been born in Portugal and know nothing of their parents homeland in the former colonies, beyond the language and customs maintained at home. Like many 2nd generation immigrants, they struggle between cultures trying to find their own identity which is inevitably different from their parents' but not quite that of the country where they were born, all of which creates family tensions between generations. 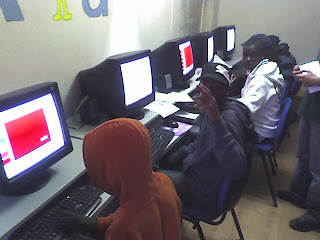 This is the computer lab the activist helped build with other community members. When the young man in the middle heard we were from the states, he said, "Oh! Whassup! Thug life!" A reference to 2Pac Shakur. Great. Europe exports fine wine, luxury goods and centuries old languages and art. We export teachings from dead rappers. I was at least heartened to see that they were all busy using localized versions of Google and Windows programs to look up high end cars and other consumer goods that are completely out of current reach for them to create powerpoints and montages of their favorite things. It all shows the reach of computers, the internet and pop culture, even in the midst of poverty.
Our host was great and wonderfully candid about the situation there and what they face day to day. It provided much more insight into the complexities of immigration issues than some of the discussions throughout the trip with academics who were well-versed in the theory of immigration, but not so much the day-to-day reality.
The visit continued at another nearby location. More on that soon.
Posted by NatashaJ 2 comments: Links to this post