You call this a vacation? Long days, no weekends, but great sights, people and food

I’ve already heard from some folks back home about what a great “vacation” this is. Let me clarify: vacations involve downtime, relaxation, no schedules, and hopefully, fruity drinks. Using those criteria, this experience does not qualify.

We have very full daily schedules and our days typically begin at 9am for a group meeting and travel to the first of several lengthy group meetings and discussions with local officials, personal appointments with local leaders and activists in our areas of interest, more meetings/discussions with officials and Marshall Fund contacts over lunch, followed by more meetings or tours of historical sites or political institutions until 5 or 6pm.

Barring travel time, we may have a short break before heading out at 7 or 8pm for dinner meetings that often last until midnight or 1am. In every European city we’ve visited thus far, lunch and dinner are long meals (2-4 hours) and dinner especially begins and ends much later than most of us are used to at home.

For this reason, breakfast is critical, and fortunately, it’s been included with our room stay in every city. So here’s an example of a power-up breakfast to get me through the day in Copenhagen. Tasty, yes? :-) 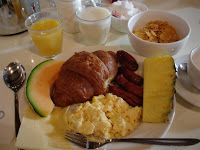 The Danes typically start meals (including breakfast) with fish, such as pickled herring, as evidenced by this herring “bar” at one restaurant. 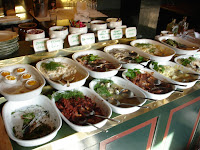 I tried it and enjoyed it, but one of my lessons of the day in Copenhagen was that pickled herring on an empty stomach does not really agree with me. Another fellow suggested I start with a bread buffer layer on future attempts. Note to self.

We usually spend 4-5 days in each city, with at least a day, sometimes more, spent traveling in or out. The remaining 3-4 full days, weekends included, are packed with meetings and activities. So I’m often up until 2am or 3 am just handling other daily duties, such as checking in by e-mail or phone with family and friends, and most importantly, doing laundry in my room.

Dry cleaning is exorbitant everywhere in Europe, so I took the advice of previous fellows and brought lots of stretchy but business-appropriate cotton/lycra shirts and sweaters (not to mention underclothes and even one pair of suit pants), which can be washed by hand and dried over a night or two. This would come in handy when my luggage took off on a side trip of its own partway through our travels. Twice.

So while this trip is providing unparalleled access to international locales, leaders, sights, sounds, and cuisine, it is not a vacation. Although I did finagle one fruity, non-alcoholic drink in Paris. ;-) Bottoms up! 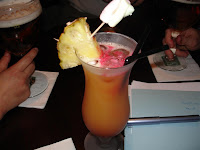 The theme of many of our meetings in each country has been the challenges European countries are facing in dealing with integration of immigrants. Denmark is struggling with integration of its growing immigrant population, which includes 2nd and 3rd generation immigrants who were born in the country. Unlike in the U.S., being born there does not automatically bestow citizenship. After nine years, residents must apply to become a citizen.

To close out our second and third full days in Copenhagen, we met with:

They each provided great insights about the Danish approach to immigration, which really only began in earnest in the 1960s (!). Before that, Denmark was even more homogenous than it is today.

In fact, I only saw a handful of other people of color when we walked the pedestrian shopping area in Copenhagen, and they appeared to be of African descent. Everyone else was white or tall or blonde, or all three. At one point, our small group of fellows became separated as we perused the shops. We all then stopped to scan the crowd for each other and reconvene.

“I thought we’d lost each other,” someone said. 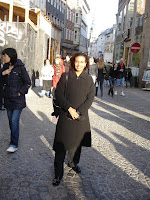 Non-homogenous me, in the crowd

Over the next few days, we learned that there is great concern among Danes and the Danish government about the viability of their current system of providing generous social benefits to its residents, including immigrants; benefits such as free schools, healthcare, and elderly care, and subsidized housing costs. Unemployed people also get 80%-90% salary (slightly less for unskilled workers) until they return to work. The system is funded by the extremely high taxes working Danes pay: about 45% personal income tax, 25% sales tax on goods, and an eye-popping 300% tax on cars. Still, the country had its lowest unemployment level ever this year: 3.8%.

Still, there’s resentment from some native Danes that the generous benefits are extended to immigrants who, in some cases, don’t speak the language and thus can’t work, and thus can’t pay taxes to contribute to funding the benefits. There is also resentment from some immigrants who feel that even when they do go to Danish schools, learn the language, and become productive citizens, they are still seen as outsiders, even after years or generations of Danish residency. For example, one person we met described himself as “not a full Dane” because his grandparents on one side of the family had immigrated there decades ago. Very different from America where many 2nd generation immigrants describe themselves as American or a hyphenated American even if they arrived very recently.

The government officials we met with are approaching the problem by trying to revamp the benefit system to reduce its cost in the coming years by raising the retirement age, and reducing some benefits, but there is obvious opposition in some quarters to that approach.

We also had the opportunity to meet with Brian Mikkelsen, the Danish Minister for Culture who is with the Conservative Peoples’ Party, and Jesper Gronenberg, the Secretary General of the Social Liberal Party. They each gave us an overview of the Danish political system and how it has worked over the past few years. 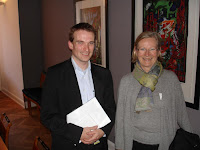 Jesper and our coordinator Kristina

Interestingly, the conservatives have been in power there for six or seven years after narrowly losing the prior election to candidates who espoused a very nationalistic, anti-immigration, ultra-conservative agenda. Their leaders, vowing to never again be out-done on conservative issues, allegedly followed the playbook of Newt Gingrich’s successful, conservative Contract With America approach in the late 1990’s and took power the next time. Since then, the conservative leadership of the Danish government has continued to be a strong ally of the Bush administration – a contrast to sentiments we heard from most other European officials and residents we heard from, who are quite vocally anti-Bush.

In fact, we would see this in action a day later on the 4th anniversary of the start of the Iraq War when we passed a crowd of chanting, sign-waving Danes headed to the American Embassy to protest Bush and the war. 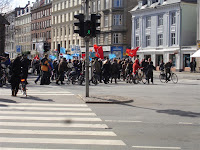 Coincidentally, we’d learned a lot about how Danish law enforcement handles unruly crowds the day before when we spent the morning with the National police and the Copenhagen police learning about innovations in riot policing and crime prevention.

Just two weeks earlier, the police had put their refined tactics to use to end several nights of rioting by people angered after being evicted from a youth house they'd been given by the Danish government nearly 25 years ago. According to CNN here, the house had been used as a popular hangout and cultural event site by anarchists, punk rockers and left-wing groups.

Despite more than 600 arrests, only one person was reported injured - facts which seem to point to the success of the police officers' approach, which they refined more than a decade ago after a protest turned violent and resulted in more than 100 severe injuries to participants and a similar number for officers. We visited the site the next day. 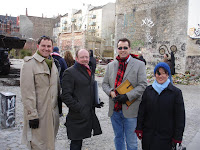 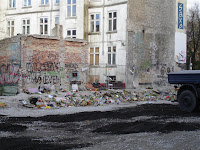 House had already been bulldozed, but many people were still gathered there, placing flowers on a small memorial and yelling at officers finishing cleanup work. 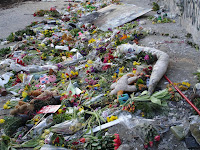 I asked whether they had studied the WTO riots in Seattle a few years ago and not surprisingly, they had. Their new approach is based on best practices (and lessons learned) from riot situations and police agencies around Europe and U.S.

One thing we found so endearing about the Danish police we met was that, on the surface, they had that cop demeanor we’ve all seen at home in the U.S. or on TV: imposing, businesslike, straight to the point, and clearly able to handle any situation that might arise. This was true of the women we saw too. They comprise 25% of the police force. We felt very secure in their presence.

At the same time, they were very friendly and welcomed us with delicious chocolate cake, pastries, coffee, tea and soda, all while outlining the intricacies of police work and crime prevention challenges in their country, and giving us a tour of their riot police equipment and vehicles. It was like: “This is how we subdue and remove a violent protestor so others in the crowd don’t get hurt. Can we get you more cookies?” Gotta love that. :-) 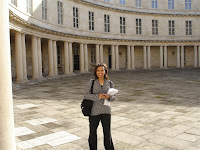 Me in the circular internal courtyard of Danish Police headquarters, built in the 1920s.

My favorite moment was when a burly, 6’3”, bald, riot police officer escorted me through the circular, cavernous police headquarters to the bathroom and along the way told me about the building’s history, takeover by the Nazis during WWII, subsequent return to Danish control, and the meaning of the decorative scrollwork lining the corridors. He then waited patiently outside and delivered me back to our group’s meeting with a noggin full of interesting historical info. I’ve loved the numerous, slightly surreal moments like that on this trip.

Later that day, we met with the Deputy U.S. Ambassador and several of her colleagues from the FBI, DEA, and the Embassy staff at her residence in the suburbs of Copenhagen. We had more sweets, treats and snacks there, coupled with interesting conversation about historical connections between the U.S. and Denmark and the state of U.S.-Danish relations today (very strong).

There is so much information to process from each day’s meetings, but we are all so busy that time for introspection and journaling time are scarce. When possible, we meet over drinks or breakfast, or during walks/taxi rides between meetings to compare notes and impressions. These moments provide an additional benefit of this experience.

Everyone is so smart and insightful and brings such a range of knowledge and experience to our interactions that we all learn and discover even more by sharing our individual impressions of group meetings, along with lessons learned from personal appointments. I feel very fortunate to now be part of the GMF network.