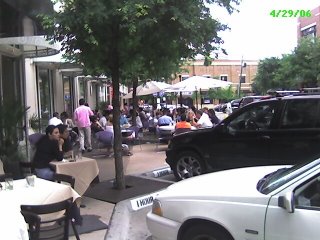 We found one of the bustling shopping areas in East Dallas that the fashionable store clerk told us about. True to her word, there were lots of shops, restaurants and folks wandering the seemingly freshly-laid sidewalks of Dallas' West Village shopping area.

It's one of those developments known as 'mixed use' in the Northwest: retail on the bottom, apartments, townhouses, condos, etc., up top, with the occasional boutique hotel and upscale supermarket thrown in for good measure.

After a couple hours of window and actual shopping, we'd worked up enough of an appetite to hit one of the many restaurants in the area. We chose Tom Tom, an asian grill and sushi bar that was pretty average.

No matter where you travel, shrimp salad rolls are pretty hard to screw up: rice noodles, lettuce, sometimes cucumbers, and shrimp all neatly wrapped up in a rice paper wrapper with peanut or some sweet dipping sauce. Pretty basic, right? Well, I had to send the shrimp rolls back twice because they'd apparently rolled them up using a paper towel, leaving quarter-sized patches of white fiber on the underside of each roll. The replacements weren't much better. This time they apparently used a lint-covered cotton towel to roll them. 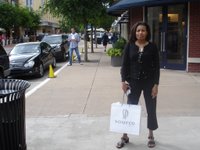 Having skipped breakfast, I was willing to ignore this second gaffe and just pick the lint off (hey, cotton counts as fiber in your diet, right?). But, I discovered the small, white lint balls were actually rolled up in the rice wrappers. Apparently their kitchen staff hasn't heard about using bamboo mats to make sushi rolls. We were really hungry, so that was a big let down. But at least they took them off our bill. It was still a nice area and outing and we'd head back for dinner later that night, but the experience would turn out to be much better. 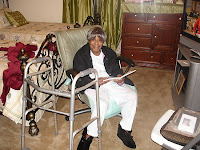 So I finally got a chance to see Granny. She gets around using a walker but still gets around, which is more than some younger folks can say. Before being forced out of New Orleans by Hurricane Katrina, she used to go to a senior center a couple times each week for exercises and socializing.
Now that she, my aunt and uncle are in Texas in a 2nd floor apartment out in a suburban-ish area with steep stairs, there's no senior center nearby and she'd have to be carried up and down the stairs to get out and about. But she still has a great attitude and does chair exercises each week to keep her strength up. She has her own room and bathroom and goes on errands with my aunt and uncle. 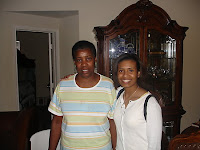 They're all still learning the area they live in after 30+ years in New Orleans. It's been a big change, but one they say they're resigned to. "There's nothing left for us to go back to," my aunt said. "They're not fixing anything and it's just a mess. We're not living like that." That's me and her in the striped shirt. She just retired after 25 or so years as a high school principal and school administrator in New Orleans. My grandmother's been living with her and my uncle for a few years and she says they all feel blessed to be able to finally spend time with each other after years of my grandmother living on her own with another daughter (who passed away a couple years ago in her 60's) in the small, Northern Louisiana town she raised her family in. 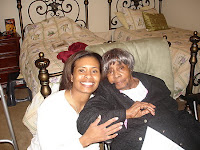 We hung out with Granny for a bit and she met my husband for the first time. She chatted with him and sized him up a bit and said, "He seems like a good man," which made me smile. At that age, they don't have to sugar coat anything if they don't want to, so I took it as the gospel. :-)
After dinner with them, we headed to the Dallas Galleria. Ice skating on the bottom, wall to wall shopping on three levels. The woman at the Celine shop just gave us the scoop on other shopping areas. We'll hit those tomorrow. 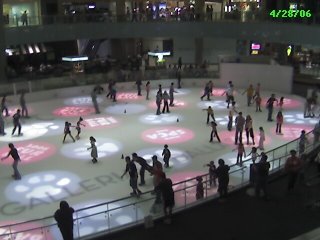 deep in the heart of TX

Actually, we're in Irving, Texas, next to Dallas. We're in town to visit with my aunt, uncle and my grandmother, who is turning 100 (!) next week. Amazing. We found a hotel deal (see basic business park view from our hotel balcony) 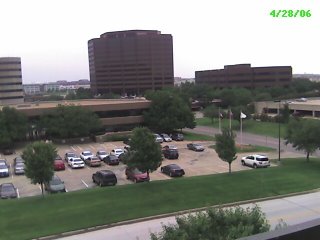 not far from their place, and my uncle from LA arrived last night too. It's a mini-reunion! :-) I can't wait to see my grandmother. It's been a couple years.

The weather in Seattle has decided to revert to its pre-spring incarnation with dark grey skies, winds, and major downpours. So we're feeling a little bit of cabin fever and have opted to head up to Vancouver for the day. 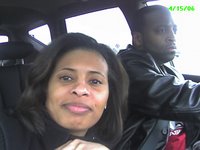 So far, the weather is still a crap-a-thon on the way up, but at least we'll soon be rained on in another country. :-) We plan to hit Robson Street, maybe Chinatown, and wrap up with our customary dinner at Gotham Steakhouse in downtown with their awesome onion bread. We're 18 miles from the border crossing at Blaine. Oh Canada, here we come!

We did hit Gotham, twice. Once for beverages while we waited for alterations next door at Holt Renfrew, and later for dinner. I had the slab of

salmon with a butter sauce, which actually was just so-so. I prefer a little more seasoning. 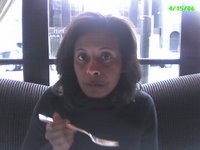 Jason, who makes awesome salmon and has basically spoiled me for any other kind but his, opted for lobster tails. 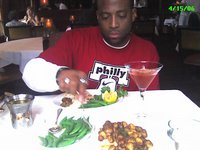 We shared the sauteed button mushrooms and sauteed sugar snap peas, which were both delicious! The peas were crisp, just-sauteed, sweet, and flavorful. The service and atmosphere were great as usual. The waitstaff is nice and professional, but not stuffy. I had a great seat on the comfy couch by the front windows, with Jason across from me on their overstuffed chair. I had cheesecake with berry sauce for dessert (sorry, no picture), which basically filled me to the bursting point before we hit the road for home.

I slept (as usual) until the border, where we just missed the Nexus line closing by 7 minutes: it closes at 9pm. So we had to do something we haven't done since getting Nexus cards a couple years ago: wait in line at the border! Horrors! :-) It took about 15 minutes, which wasn't too bad, but that's an eternity compared to our usual 2-4 question session and quick wave through. For some reason, traffic on the other side heading into Canada was packed. It looked like at least an hour wait. I joked that maybe the administration had done something else idiotic while we'd been gone and we were seeing the front edge of a mass exodus from the U.S.

I took over driving duties at a gas station on the other side where we had the choice of paying $3.15, $3.08 or $2.98 per gallon for premium. What the hell?! A war, thousands dead and injured, billions spent, no foreseeable end to it all, neglected domestic issues, a prescription drug benefit program that stinks, AND $3/gallon gas?! Who okayed this moron?! But I digress.

Filling up cost $50 exactly. I almost felt bad until I looked over at the guy at the next pump gassing up his motor home to the tune of $100.01. Sheesh! I also noticed he had Veteran plates. Wonder what he thinks of Bush and all this. Wanted to ask but that's a bit personal for the pumps.