These days during my pregnancy, I find my energy levels veering from energizer bunny to desperately in need of a nap. Last weekend was an energized one, despite having managed to catch a cold.

I'm usually very diligent about handwashing, slathering on antibacterial gel and not touching doorknobs, handrails and other often-handled surfaces, so colds for me a very rare. Like once every year or 18 months. So having one in the summer while I'm pregnant was both surprising and annoying. Mainly because not only did it cut into my enjoyment of the incredible Seattle summer weather, but I also couldn't take my usual pharmacoeia to make the effects more managable.

A consultant nurse with my doctor's office said Tylenol was the only safe medicine for me at this point and suggested I take "hot liquids, spicy soups, and hot juices" to soothe my sore throat. Um, it's 80 degrees out, so the thought of hot juice would make me gag if my throat didn't already hurt. So I had to just tough it out cold turkey.

Plugged nose and sore throat notwithstanding, I at least had energy, so I decided to get out and enjoy the sun with the dog, use anti-bacterial like crazy, and steer clear of touching anything so as not to spread my cold germs around.

After picking up the pooch at my folks' house and a fun breakfast with an old co-worker in West Seattle, I headed to Seattle's North Beacon Hill area for a Meetup with other Pit Bull owners. 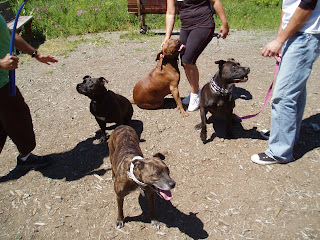 Here's Isis looking super attentive because she thinks I'm going to throw her ball any minute now. Note the dog that looks like her twin to the right. That dog's owner confirmed that there are many dogs with the same look around the area. Not sure who's breeding them, but they all have awesome temperaments, although his girl was a year or two younger than Isis and bigger. She also wasn't quite as dog-friendly as the others and was apparently prone to running giddily off into the woods for hours at a stretch, so her owner opted to keep her on leash even though we met in one of Seattle's many off-leash dog parks. 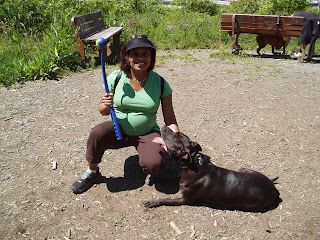 Here's me, the belly, and a still-attentive Isis. She did great, despite the 80+ degree heat. She'd romp with the other dogs a bit, chase the ball a bit, then lay in the shade a bit. Dark dogs and hot days are usually not the best combo, but there was plenty of water and shade and she was a great breed ambassador.

The next day, we hit the Fremont Sunday Market where I needed to pick up a ring to temporarily replace my wedding band which I've grown too big to fit. I have been wearing my engagement ring and band on a necklace. Now I can at least wear some semblance of a band.

With J. busy for the day, Isis played sidekick again and lounged in the shade of each stand I perused and willingly submitted to lots of petting by passersby who found her glossy coat and laid back demeanor irresistable. 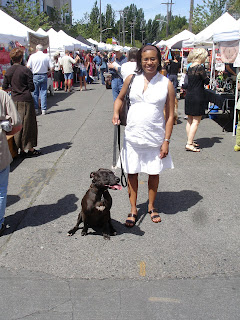 The only activities that marred the sunny lovefest were two (!) separate West Highland Terriers who attacked Isis - once as she lay at my feet just inside a booth, and again as we walked up the sidewalk towards our car. One minute all's quiet and we're minding our own business, the next the Westies are lunging and snarling at the end of their leashes. Only one of the owners apologized. In both cases, Isis returned the growling and barking favor, which of course looks a lot more menacing coming from a 58 pound pitbull than a 2o pound Westie.

According to the Wikipedia, Westies are known as "big dogs in a little body" because of their "bold temperament." These could have become "hurt dogs in little bodies" if I wasn't so quick to take control of the situation and rein Isis back in, and if she had a more aggressive temperament.

In each case, I pulled her back into a sit then calmly walked her away from the situation while the Westie owners continued wrestling with the barking, snarling ball's of white fur at the end of their leashes.

Because of Isis's breed, she is held to a higher standard of behavior, as am I as her owner. Going after another dog the way the Westies did to her would be absolutely unacceptable and would likely result in police being called to the scene. Unfortunately, I've found that many small dogs are allowed by their owners to engage in behavior that would not be tolerated in a larger breed from the menacing barking and lunging to jumping up.

It's unfair to all dog owners and especially to those whose well-managed and well-behaved dogs that may be kept out of events or venues because of someone's past experience with one of the not-so-well-behaved ones. All I can do is make sure I'm doing everything I can to make sure Isis and I are ambassadors for her breed. So far, it seems to be working out, despite incidents like that.

PS - Isn't it ironic that we spent Saturday with several other pitbulls in a somewhat confined space with no problems but just a day later had two less than stellar episodes with so-called "family friendly companion dogs"? See: that's why I'm sticking with pitbulls. Those little dogs are like walking around with loaded guns. Hee hee! :-)
Posted by NatashaJ No comments: Links to this post