The nearly overwhelming excitement over the presidency of Barack Obama is somewhat tempered by the realization that the job that lies ahead for him and Joe Biden is being made even tougher even as we speak by the Bush administration. Bush and his minions are busy wreaking as much havoc as possible in their waning days in office. The New York Times has more.

So Little Time, So Much Damage
While Americans eagerly vote for the next president, here’s a sobering reminder: As of Tuesday, George W. Bush still has 77 days left in the White House — and he’s not wasting a minute.

President Bush’s aides have been scrambling to change rules and regulations on the environment, civil liberties and abortion rights, among others — few for the good. Most presidents put on a last-minute policy stamp, but in Mr. Bush’s case it is more like a wrecking ball. We fear it could take months, or years, for the next president to identify and then undo all of the damage. Read more here.

A great quote about Barack Obama's selection as president from the New York Times article For Many Abroad, an Ideal Renewed.

Francis Nyamnjoh, a Cameroonian novelist and social scientist, said that for America to choose as its citizen in chief such a skillful straddler of global identities could not help but transform the nation’s image, making it once again the screen upon which the hopes and ambitions of the world are projected. Read the full article. 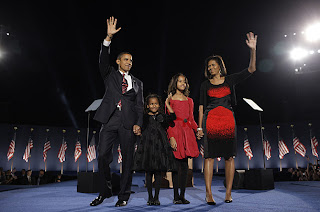 Barackin' the vote with the next generation 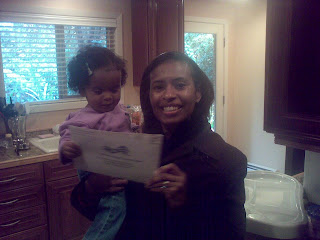 Sent from my Nokia phone
Posted by NatashaJ No comments: Links to this post 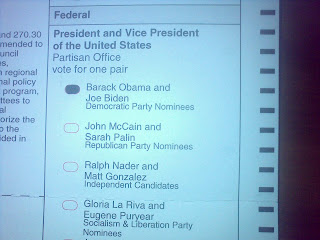 Sent from my Nokia phone