The future of the USPS 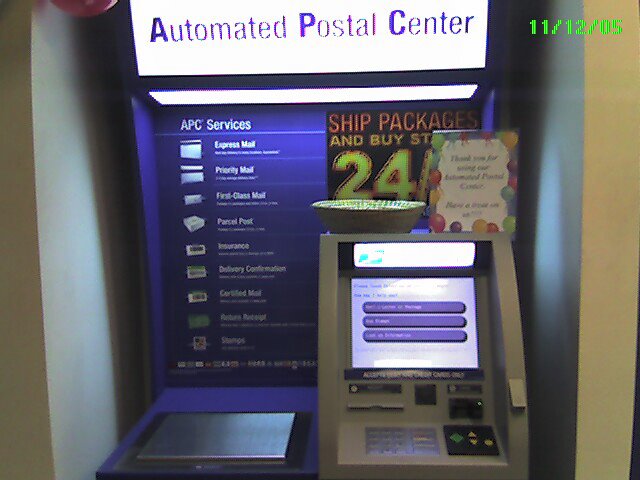 Early adopter that I am, here's my latest favorite tech gadget, courtesy of the United States Postal Service of all things. This is a picture of one of the new Automated Postal Centers that are cropping up around the city. It's basically an electronic kiosk, similar to an ATM, that let's you figure out how much postage is required for packages, buy stamps, and send it off, right from the post office lobby, anytime, day or night.

What's so great about a fancy kiosk? No more waiting in lines! Mail things when you want, not when the post office is open. I took this picture after mailing some domestic and international letters at 8pm tonight. How convenient is that?! No spending your lunch hour in line at the post office or trying to rush there after work. In this age of e-mail and online bill payments, perhaps that's not as much of an issue for some people. But tech maven that I am, I have a thing for fountain pens and still handwrite letters and cards. So the post office still plays a prominent role in my life.

And I seem to have an uncanny ability to get in line behind urban luddites: customers who have seemingly beamed here from 1973 and have never used an ATM touchpad before, or who spend six minutes deciding exactly which type of first class stamps they want, or who get to the front with seven unsealed packages that lack zip codes or return addresses, or who otherwise violate the rules of postal customerdom. It's infuriating for those of us who are accustomed to technology-enhanced, near-instant gratification and who think that everything, postal transactions included, should take approximately 7 seconds. Maybe 9 if it's your first time doing it.

So for those reasons, I'm LOVING the Automated Postal Center. Sure, the Glass Half Empty view is that it's yet another way to take a job or two from a postal worker, but the Glass Half Full view is that it may also free one or two postal workers to do other more labor-intensive tasks, thus speeding things up for other customers overall. Plus, the kiosk likely creates a job for the person who has to service the machine when the inevitable glitches crop up. That's the beauty of technology and the knowledge economy. Some jobs are lost, new ones are created. Sure, it's woe unto the folks who are not ready to operate in this kind of economy, but that's a diatribe for another day.

So look around the next time you're at the post office and you hear someone ask how much 37-cent stamps are. Again. An Automated Postal Center may keep you and your packages on the move.

Death of a dream: monorail voted down

I'm in a bit of a funk over the outcome of the local election on November 8. In a 65% to 35% vote, Seattle voted to shut down the Seattle Monorail Project, just two months from the start of construction. Two months! People outside this area are flabbergasted (links to PDF of article from London) that it even had to be voted on five times and that the Mayor and City Council wouldn't support it.

Part of what's so frustrating is that so many people bought into the lie that the money spent to date on the Project was "wasted", even before the vote. $70 million of the $180 million spent bought property that will now be resold, likely at a higher return for taxpayers. The rest paid for all of the technical work, engineering, environmental impact review, public outreach and and coordination with other agencies that brought the Project to the brink of construction in a record 3 years. The national average for getting to this point is 7-12 years (!) and at a cost a lot higher than $180 million. Unbelievable. Now that we're not going forward, it will be wasted. 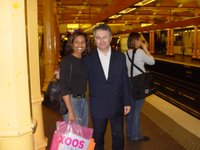 While I was in Paris, I met with the Communications Director for the Paris Metro system (That's him to the right. Yes, I'm on the job, even while on vacation).

He's worked for the Metropolitan system for 33 years (!) so he's seen all the ups and downs transit projects go through in getting built and expanded. Despite my rusty French, I was able to tell him about the monorail we were trying to build, how everyone was upset about the proposed cost, etc. It took him all of 5 minutes to assess the situation: "Ce n'est pas un problème financier. C'est un problème politique." It's not a financial problem 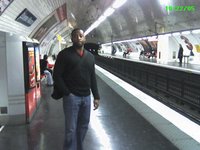 . It's a political problem. Mais oui

Basically he said regional leaders lacked the political will to make the monorail happen and that while it had great public support, it lacked a politial sponsor willing to see it through and deflect the inevitable opposition.

One example he gave was that they were extending a line (of a decades old successful system) and still ran into opposition from a neighborhood activist who felt the construction was too noise, too disruptive and unnecessary. After some delay, the concerns were assuaged and the project continued. "Because this is what happens: people complain," he explained. "About the construction, the cost, the disruption. You deal with it and move forward. Once it's running, people love the system again and clamor for extensions to other areas."

Small consolation that apparently only people in foreign countries with excellent transit systems understand the benefits of the project we were trying to build.

Here's a shot of J. in a Metro station in Paris. I took several pictures in the trains. They were great! Clean, efficient, timely, affordable, and easy to navigate. We walked and rode the trains everywhere. Midway through the trip, my car-loving husband even remarked, "These trains are so convenient, I don't even miss driving. If I lived here, I wouldn't even need a car." Yeah, that's what having great transit will do for you. Too bad we'll never know what that feels like here in Seattle.

Oh yeah: the post-Paris buzz is definitely gone.
Posted by NatashaJ No comments: Links to this post 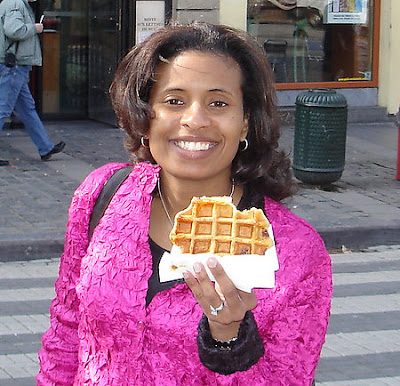