Letters and emails and faxes, oh my! Behind the "Letters to the President"

Those who love letters and communication might be as intrigued as I was by this cool video from the White House about the 10 letters President Obama reads from the public every day to stay in touch with America's issues and concerns.

According to the site: "Letters to the President" is an exclusive behind-the-scenes look at the process of how those ten letters make it to the President's desk from among the tens of thousands of letters, faxes, and e-mails that flood the White House each day.

The video has several neat factoids, such as, each week, the president receives about: 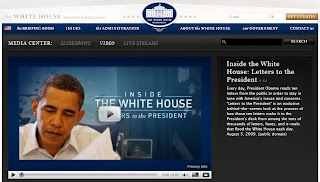