I thought the kids looked pretty stylish heading out this morning. I was particularly happy for Dylan, who doesn't really care what you put on him, though he likes any clothing with Thomas on it, and his Crocs, as mentioned previously. 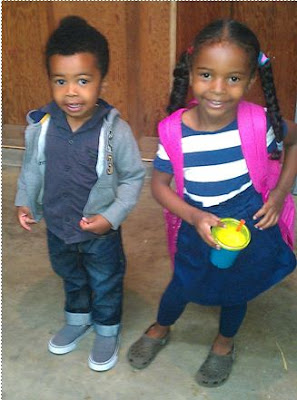 We struggle to find clothes for him that are as effortlessly cute and comfortable as the ones made for girls and that don't feature a truck, dinosaur, dog, skull, sporting equipment or athletic team, or a trademarked character.

Ava has been particular about what she wears since she could voice an opinion, like laying out her own outfit at 2 1/2. Thankfully, we get lots of great pre-loved dresses and outfits from friends and family for her, but there are also just racks and racks of great girls items to choose from in the stores.

For boys though, the last time I hit Ross in search of short sets for Dylan as the warm weather finally appeared in Seattle for the summer (in mid-July no less), there were still several racks of clearance items for girls, and exactly four outfits in Dylan's size. Two of them were athletic gear and one was hideous.

But I did find the shirt and jeans he's sporting. And even his fashionable Dad gave a thumbs up to the Vans-like kicks. "Nice! I've been looking for some suede joints like that!" he said with a smile. So here's the rundown of the looks they're modeling. I feel so Project Runway.
Ava
Dress: H & M
Capri leggings with lace: Gap Kids