Never thought I'd be touring a potential kindergarten that costs more than my 1st year of college. Hope the fact that we sang Nicki Minaj all the way here isn't an automatic disqualifier.

The comments rolled in, including suggestions from my 1st grade teacher who said:


Provide rich experiences at home and community, put in reg/public preschool w/nice competent staff and save the $$$$ for a superior post grad school. In today's world a BA is not enough. Well, that's my unsolicited opinion. Exception: spend $$$ on a preschool that will give [your] child a second language (Spanish, Chinese). [You] do not have to speak the 2nd language [your]self.

Subsequent comments were from other parents lamenting the poor quality of our local schools and opinions on the two independent schools we were considering.

A middle and high school classmate weighed in that the thread made her feel fortunate that her local public schools back east are high quality. I responded:


You are fortunate! And that's a feeling more communities should be able to experience.
It's crazy to think I ended up at [school] with you because the schools in my neighborhood where I was bussed to 30 years ago weren't adequate for my needs. And we're still having the same conversations!

I know schools are not businesses, but if a company wasn't satisfying a huge portion of its customers year after year, it would be out of business. It would also presumably be learning from customers and improving the product every year.

It's frustrating that that's not happening in a sytematic way across all of the Seattle Public Schools instead of just in certain ones.

I told Jason about the thread and he said, "Kids around here might as well be in 'Waiting for Superman' too" - referring to the movie that came out in 2010 about the failures of the public school system in America and how some families' and kids' only chance at escape is through the random chance of school entrance lotteries.

Because of Ava's September birthday and the now-firm cut-off for kindergarten entrance, we have decide to wait another year on sending her to kindergarten. When Jason and I were kids, we both started early or were skipped ahead because teachers and our parents agreed we could keep up.  Ava will be five in the fall but will have to wait until the following fall when she's just turned six.

I am really bummed for her because I sense that she's more than ready in all the areas of development that they consider for kindergarten acceptance: social, emotional and academic. Her teachers, who are strong proponents of kids waiting that extra year, agreed, saying, "Ava is an exception to our usual preference. We think she's ready." And I don't think they're saying it because they want to get her out of their class sooner. :-) 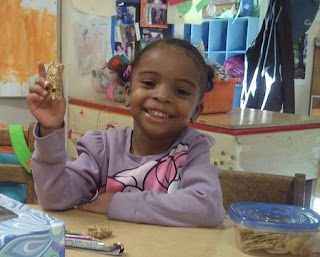 But the schools we've considered are not flexible in allowing her to start, which seems arbitrary and not in her best interests. But it's out of our hands. So we will keep her at her preschool another year, maybe look at starting a language as my former teacher suggested, and work on academic and arts topics that pique her interest at home until a year and a half from now. Sigh.

I just hope we're doing right by our bright girl. I don't want her development to suffer because of an inflexible and arbitrary administrative rule. We shall see.
Posted by NatashaJ