As usual, Seattle's hills and a wacky weather pattern made for several dicey days last week weather-wise. Forecasters were a little off with their predictions of massive snowfall and widespread chaos, but some areas did get more than a foot of snow and the storm itself went by many names over the past week: snow-pocalypse, snow-maggedon, and my personal favorite Sno-M-G. Ha!

Many folks either stayed home because they couldn't get around, or because they were instructed to stay home from work if they weren't first responders or essential personnel. With buses on snow routes far from my house and a slick, hilly mess in every direction... 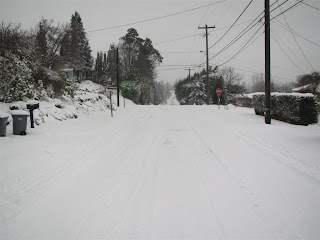 I was fortunate to be able to work from home all week as first snow, then ice on top of snow made commuting inadvisable. Having worked in TV news, then government communications, I've had my turn as "essential personnel" working 12-hour shifts out in the elements or in coordination centers for days on end making sure that people have accurate information and resources for dealing with severe weather. When I was in news, the station would get hotel rooms close by so that those who might not otherwise be able to make in wouldn't have that problem. If necessary, I would do that now for myself, but thankfully, that's no longer the nature of my job.

Unlike my first jobs as a teenager where I punched a clock and worked on a trayline at a hospital in the wee hours, I can now do most of my work by phone and online. Upside: working remotely from home when the weather outside is frightful or dangerous. Downside: if it can be done remotely, it can probably done by someone in the developing world for a fifth the cost. Except that I work in local county government customer servcie, which is hard to outsource to the far reaches of the planet. So far.

The best part of working from home? Stepping away from the computer for lunch and some time in the snow with the kids.

The worst part? Trying to explain to the kids that even though I'm here, I'm not available and that I'm working, even though it looks like I'm just talking on my cell phone (conference calls with other managers to coordinate resources, and share input on operational and policy decisions, like whether or not to close offices for the safety of staff and residents who aren't telecommutin) or typing on my laptop (editing materials, responding to emails, approving timesheets, drafting content for staff materials, planning upcoming trainings, etc.).

At one point while Jason worked and Dylan napped, I was on an hour and a half conference call meeting and Ava asked to do my hair. I nodded yes because I knew it would keep her busy and quiet for an extended period. As I talked and typed, she busily brushed, twisted and parted. I finished the call and the day sporting a couple crazy ponytails and multiple hair clips, but she got her "Mommy-Ava time" and I got my work got done. Booyah! Multi-taskin' mama.

Four days into the storm, just as I was thinking how working remotely wasn't so bad, the power went out: no lights, heat, hot food or eventually, electronic devices. Insert blood curdling scream.

Some people in outlying areas are used to dealing with outages, equipping their home with generators and such to maintain at least a semblance of normality in the face of storms and other extreme weather. However, I live in the city so that I don't have to do that. Needless to say, though we had some emergency provisions, they were not enough to make it at all comfortable.

The first five hours weren't so bad. "It's like camping!" Ava said with a smile, though she's never camped in her life.

She and Dylan spent the first few hours chasing each other with flashlights and exclaiming about the first-ever fire in the fireplace. This is the second home we've had with dual fireplaces and this was the first time we'd used them after Jason walked over to a nearby convenience store and procured some firelogs.

Ultimately, we lost power for 13 hours, which was fun for the kids (flashlights! A fire in the fireplace! All the snacks we can eat!) but quickly grew tiresome for us adults, especially once the electronic devices started losing battery life.

Notes for the next time:
All in all, we survived and are back to normal.
Posted by NatashaJ