We had a lovely Christmas with 35 or so of Jason's relatives for Christmas brunch, followed by a small gathering with my folks at our house. But I was focused on being present rather than on documenting everything, so we didn't even get a family picture this year. But I did capture a few shots. 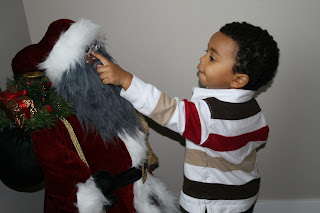 Dylan checking out the Santa figurine at Jason's cousin's house that was the same size he is... 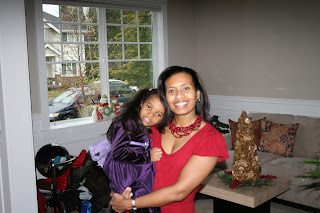 Me and Ava, who asked to have her hair blow dried for the special occasion... 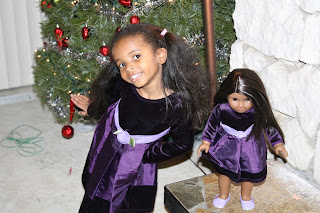 Which worked out well when she opened the gift that got the biggest squeal: an American Girl doll with straight hair too. The matching dresses came from Ross a couple months ago. It's a line called Dollie and Me, which is toddler and preschooler-sized outfits with matching doll size dresses. My agony over the decision of whether to spring for the doll and if so, what hair type is worth a separate post. 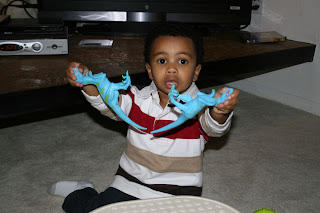 And I didn't get a shot of Dylan with his two favorite gifts: a Thomas the Train talking caboose that can run on his little wooden train set with the other magnetized cars, and a Thomas backpack that can also be pulled on two wheels. It's what he uses for toting around his birthday gift matchbox cars, trains, and these two dinosaurs, which he likes to hold facing each other while roaring, as if they're have a steel cage pose-off in the WWE. Which gives me an idea: man bags for boys. It could happen.

Unbeknownst to him, he picked all of his gifts a couple nights before during a Target run. Unlike Ava, who has fully fallen prey to the marketing juggernaut of commercials during kids shows and basically asks for everything that is shown on TV, Dylan still doesn't get what all the fuss is about and can't verbalize his wants exactly either.

With Ava's requests, we simply say, "You'll have to put that on your list and see if Santa brings it." Since she doesn't read or write yet (beyond her name and individual letters), we might as well say "write an app that will download those to daddy's iPad." But it's bought us some time, since she usually forgets about it within minutes, or until the next commercial or visit to a store featuring one of the coveted items.

With Dylan, I simply took them to the toy aisles in Target and watched what he was drawn to. I already knew anything Thomas the Train would be a win, but watching him beeline for certain items helped. And when he refused to put certain ones down (like the backpack and dinosaurs) until I could distract him or enlist Ava to distract him, I knew we had winners, which I then furtively stuffed under grocery items in the cart while his back was turned. I was like the David Blaine of toy shopping. And he was none the wiser Christmas morning.

Soon after Dylan's birthday earlier in the month, I asked Jason what he wanted to do for him for Christmas.
"I don't know yet but he's getting the full deal," he said rather forcefully. Seeing my blank look he explained, "My birthday was right before Christmas too and I always got that BS 'This gift is for your birthday and Christmas' line. I'm not doing that to him."

"Mm-hmm: basically you got hosed because your birthday wasn't some other month besides December," I replied.

"Exactly," he said. "And it's total bull." Clearly, this is still a sore subject and I'd never realized how much because I've always done dual gifts for him. Your birthday is special and separate from other celebrations, whether it's in April or the day after Christmas. So we did get Dylan several nice little gifts.

Yet all in all, this Christmas seemed to reflect the still-challenging economy and our interest in getting away from gift overload and spending more time with each other rather than money on things we don't need and will just be looking to purge later. It felt right-sized.

And we will be purging the kids' things anyway in the next month or so because they're outgrowing many of their infant and toddler toys. They will hopefully be loved by some other kids soon, freeing up valuable toy box real estate for the Christmas and birthday items.

I hope your family's holiday celebrations were just right for your needs too.
Posted by NatashaJ