Last week, Ava and Dylan were enjoying pre-bedtime horseback rides around the house from J. Much laughter and squealing ensued.
J. must have been inspired. After he returned from work Saturday morning, we hopped in the car to go ride horses at the Harvest Festival east of Seattle at the Suncadia Resort. It's a short drive so we were out there earlier this year and about a year and a half ago with the kids.

The horse ride was actually impromptu. We passed a sign as we were nearing the resort and J. said, "You know, I've never ridden a horse."

"Where would I have ridden a horse in the city?" he asked.

"In the parking lot of Safeway, like me and Ava," I replied.

"Right. Okay, let's turn around! You have to ride!"

So we turned around and pulled in to the riding area, which was really just a shed with a horse trailer and a corral off the main road. We met the friendly horse dude and Jason was introduced to Alvarez, their biggest horse. After a few instructions on steering, they set off through the trees for a 30 minute ride. 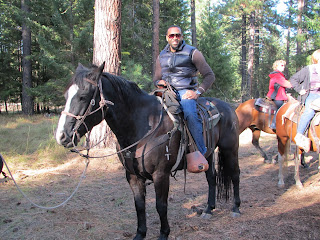 The kids were asleep but woke up once the car stopped. They were too young to ride, so we hung out with the remaining horse tied by the shed and tried to counter their nature deficit disorder (NPR). 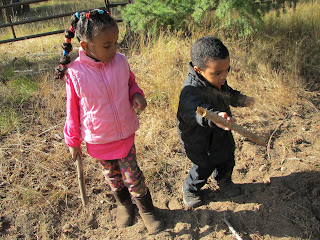 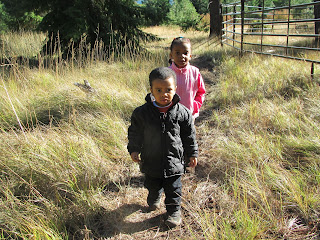 tromped through the grass, kicked dirt on things, investigated ants, stuck twigs in mole holes, and no one lost an eye. It was great!

I worried that Dylan would be freaked out by the huge horse, but hearing it suddenly whinny loudly behind him, he turned around and said, "Sssshhh!" Ava even asked if we could go camping. Clearly their dad's outdoor-phobic tendencies are not rubbing off. Yet.

As we waited for J. to return from the ride, another group of riders came back and one of the women's voices sounded familiar. But I couldn't place her. Finally, I asked her name and introduced myself. Recognition crossed her face too. It turns out we'd worked together at a TV station in Seattle 18 years ago when Jason and I first started dating. Small world, right?

After the ride and catching up with my former co-worker, we continued on to the festival, and let me tell you: that was totally fun. For us and the kids. First off, the sun was shining - in October! - and it was a beautiful, Fall day in the mid-60s.
﻿ 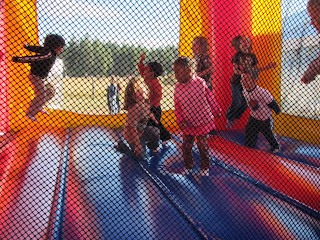 ﻿
And a bouncy house for the kids. Directions: 1. Inflate contraption. 2. Insert small children hopped up on Harvest Fest fun, goodies and preschooler adrenaline. 3. Let the mayhem begin. Again: no one lost an eye. So it was all good. 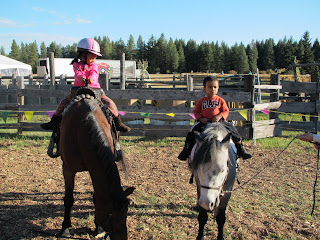 And more horse riding. In fact, I was the only one who didn't get a ride that day. 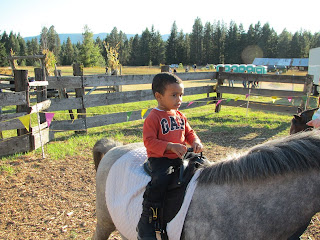 Dylan may be freaked out by vaccums and haunted houses with animatronic skeletons (there was one at the Harvest Festival), but a several hundred pound pony? Not at all. The lady guiding the kids around the corral began with, "Okay, you're going to have to..." before she could finish, Dylan had already grabbed hold of the handle and was looking at her like, "Next?" 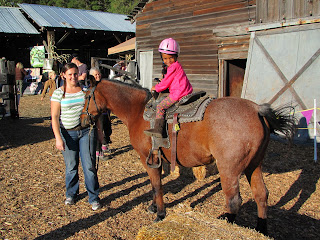 Ava to lady leading her pony: "This is my best day EVER!"

I agree. Add in the hot cider, kettle corn, homemade apple butter we bought, and lunch at Suncadia's restaurant before heading home, it was pretty darn good, and a reminder that we need to get out in nature more. Which I'm totally up for, as long as it's not raining. So unless there's a surprise trip to Vegas or Maui in the next few months, we won't be doing anything like this again until Spring. But at least we have pictures and memories. 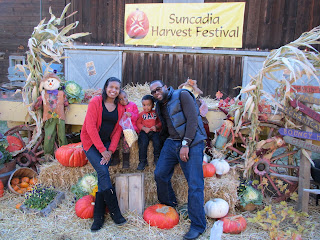