We've been in a baking mood around Casa Jones the last few weeks, and the awesome local Grand Central Bakery (@GrandCentralSea on Twitter) recently helped kick us into overdrive.
Maybe it's the still-gloomy, winter-like weather we're having here in Seattle that has me craving comfort food. I love it when the heat and smell of baking goodness permeates the house, chasing away the blahs. It reminds me of when I lived near a bakery. On summer days, when the wind was right, my apartment would fill with the smell of baked bread. No NIMBY complaints for that facility!
Since Ava has been old enough and steady enough to grasp a spoon, I've allowed her to "help" me cook. Now that she's 3 1/2, she's actually pretty helpful and is getting better and better about keeping ingredients in the pan or bowl during her ministrations.
A couple weeks ago, she helped pour corn muffin batter into the mini-mold that she requested when I replaced the old, battered ones we recently recycled. 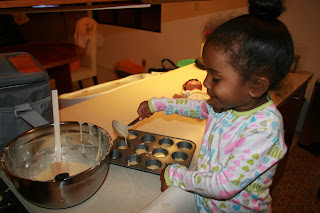 She actually did a pretty good pouring job. Guess that tea set really does help with fine motor skills. 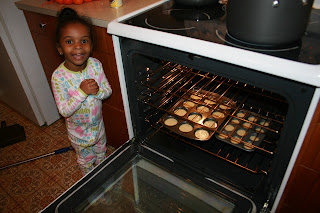 Her dexterity came in handy recently when I had a chance to try a home version of the amazing Morning Glory Muffins that Grand Central Bakery used to sell. Yes, used to. I made my monthly pilgrimage last month to pick up some baked goodies and learned they had been discontinued. Developed world whining and kvetching ensued via Twitter.

But the customer service and social media savvy folks at the bakery didn't tell me to suck it up or shut my literal and figurative pie hole.

They commiserated with me, much as the counter staff had. After all, a bakery is about using baked goods to connect with people, right?

Well their awesome marketing staff did indeed follow up swiftly with an email and a card for a free pastry. But wait, there's more! Since they're no longer making the muffins, she offered to try to downsize their commercial recipe for a home batch for me and my kiddos to try out.

How cool is that?! This all happened just before we left for our Mexican vacation, so after we returned and settled back in at home, one night after work I gathered the ingredients to make a run at the recipe. They'd provided a couple versions (one large batch, one smaller) and suggested a food scale, just to be on the safe side. After a long day at work and with two antsy kids underfoot, I didn't have the patience or time, so I was willing to take the risk of eye-balling the measurements. Plus, as the Marketing Director suggested, I could start with the small batch and if it was way out of wack, I wouldn't be out so many ingredients. 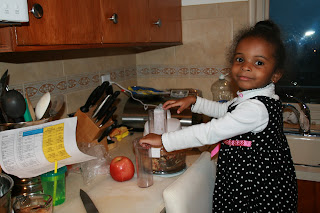 Ava got the ball rolling with the electric slicer/grater, prepping the apples and carrots for the mix. 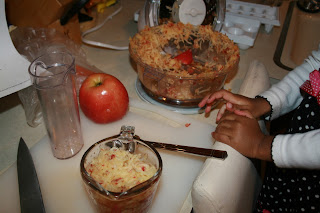 Next, we added the rest of the fruity, nutty, Morning Glory goodness: coconut, almond slices, raisins,  orange zest and dates. 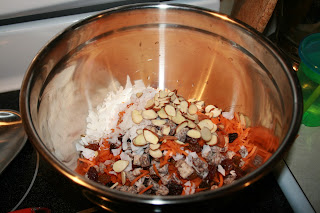 Separately, we combined the flour and dry ingredients (baking soda, cinnamon, etc.), then oil, eggs and such, then put it all together in the stand mixer. 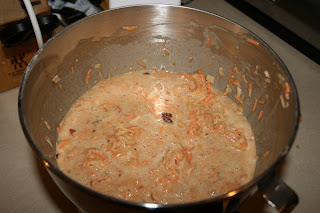 Finally, although I had non-stick pans, I sprayed them with baking style spray oil (it has flour in it) to be on the safe side because it was my first time using the new pans and I didn't know how well they'd release the muffins. But I now realize there's sufficient oil in the recipe that that was probably redundant. I'll skip it next time. 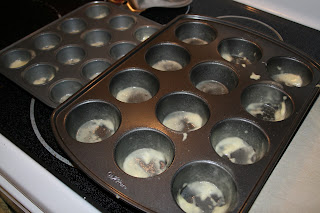 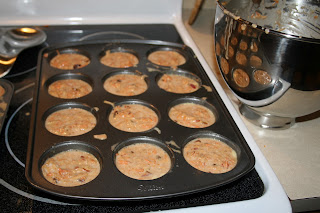 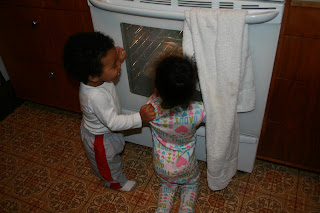 Eager taste-testers await their chance to ply their trade... 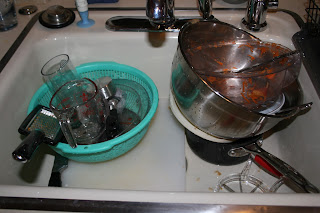 Mountain of bowls and utensils that ensued. Although the small pot and a serving bowl were left over from lunch. Thank goodness for dishwasher-safe tools! I don't know how those pioneer peeps did it. 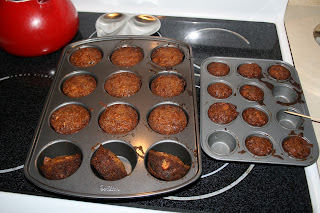 And finally, the piping hot results, which yielded 1 1/2 trays of regular size muffins and one mini-tray. 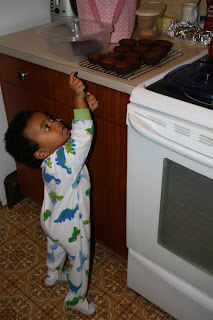 Dylan, who is almost 16 months but not saying much besides the occasional Mama and Dada, used his one other almost-word to indicate his desire for one of the muffins. Repeatedly, on tiptoe, he pointed to the muffins with an emphatic, "Ah-Dat!" and tried to grab them himself. He ate three regular muffins and one mini before I cut him off.


We will be adding this to our baked goods repertoire with some minor modifications and we send a huge thanks to Grand Central Bakery for sharing their wonderful recipe with our family. Now THAT is an example of great customer service that will keep me coming back for their other goodies.
Posted by NatashaJ