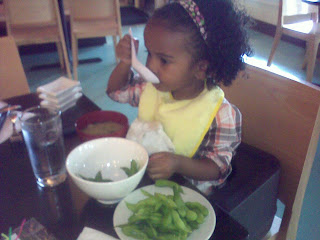 Ava loved her edamame, miso soup and the kid's bento box. It had teriyaki chicken, rice and a small seaweed and cucumber salad.

Watching her sip out a glass without spilling, eating the pre-opened edemame and happily sipping her soup with little assistance or fanfare, Jason said, "Man, I don't think I could do that until I was about four."

Still, he nearly choked when she appeared on the verge of maneuvering a piece of chicken into her mouth with the chopsticks. Yeah, she's pretty good, but not THAT adept. We set her up with a fork and she was good to go, with more food in her mouth than on the table by meal's end.

I know it's just standard kid development, but it's very nice to be at a point where we're able to go out for a meal and she's pretty self-regulating.

Also, it's not like one description I read in pre-kid days that said good practice for going out with a kid was to take a wild goat to a store and pay for everything it ate or damaged. Thankfully, our goat is pretty civilized and rarely damages anything.