A friend sent me a link to this Slate magazine article "Organic Panic" about how agribusiness and others are carping about the organic garden Michelle Obama had installed on the White House lawn and "the message it sends" that organic is better than conventionally raised foods. Right. Head. Throbbing. 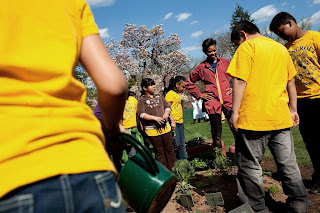 Anywho, according to Slate, in addition to their issue with whether touting organically grown food is good (like that 'complaint' passes the stink test), there are also those who are bothered that since she's pushing fresh, local food, she's not also pushing home cooking. "The main criticism: She should cook, too."

Seriously?! I don't even run a household for the leader of the free world and I would drop cooking nightly dinner in a heartbeat if I could, as I did tonight (Thanks J.!).

Are these critics for real? What's she supposed to do? After visiting schools, giving speeches, and hosting dignitaries all day, then prepping for the next day's work on behalf of the country and underserved constituencies, she should head to the White House kitchen and elbow the trained chefs aside so she can work a little Rachael Ray action, all before the girls are home from school? Puh-leeze. Has this been a big complaint of previous first ladies too? I'd bet the closest Nancy Reagan ever came to the kitchen was the tour on move-in day.

And I'm not even going to get into how this harkens back to time worn stereotypes and realities of Black women as household cooks in homes that weren't even their own.

As one of my aunts told me when I said J. does his own laundry, "Good chile. And let him keep doin' it. We've done enough laundry for men in our lifetimes to cover you and everybody else for a while." I'd say the same goes for women (of any race) and cooking, if they are so inclined.
Posted by NatashaJ